As a child, I would gaze at the framed photos of my late relations and think, “Why do they all look so angry?”

Then, after the kind of careful thought that only a child could have, I decided it must be because they were uncomfortable in their clothing. The men with their suits, waistcoats included, and precisely styled moustaches. The women in their velvet looking dresses, hair tightly and neatly pinned back. Well, I wouldn’t smile either if I were waiting in the Lowveld heat, dressed like that, to have my photo taken.

It wouldn’t be until many years later when my grandmother explained who they were that I took a warmer approach to the way I thought about them.

This is not going to be the usual kind of blog. While we normally chat to current figures, this is a blog about the Lowveld, and what better way to honour that than by writing about a member of one of the pioneering families: My grandmother, Shirleen.

On one Saturday morning this month, I made my gran a cup of coffee (to hell with the assumptions that us English speaking South Africans only drink tea), and sat down with her to talk about what life was like back when she was a child.

If you sit next to her for a while, she’ll tell you a story from her life. While she reminisces about her incredible journey, tears fill her eyes. But if you ask her if she’d have done anything differently, she’ll tell you she lived life her way and regrets nothing. In fact, at her recent birthday tea, she sang Frank Sinatra’s “My Way” to her friends, with emotion shaking her voice.

I must start by saying my grandmother is a remarkable woman; a real fighter from a time when women didn’t fight. She was born on the 21st of January 1925 in Barberton. This year she turned 93 years old and she is as feisty as ever. We argue about politics, religion…and her concerns over my apparently bad cooking.

Born a Williams, my gran was the youngest of four children. She never had the opportunity to know her dad. He passed away when she was just 9 months old, forcing my great-grandmother to become a working woman, something almost unheard of at the time.

The Williams’ family were prominent in their own right, with some of the family founding businesses. They also happened to be related to another pioneering family; the Andrews.

My grandmother literally comes another era; a time that we could never relate to. Nothing was hurried, life was slow, and everyone got where they needed to be without fuss. Hearing it from her, people were relaxed and really savoured life, even when times were tough.

The Williams’ family were by no means rich people. To survive, my great-grandmother Maud (a name she really hated) had to learn to play the piano as a means to make a living. She would quickly become an accomplished music teacher in Barberton.

As for my grandmother, being raised by a single mother meant that she was often left to her own devices. Her childhood was spent hiking the hills and mountains around Barberton with her friends and swimming in the rivers. It also meant riding on the back of a milk cart, after being warned by her mother not to. Her childhood rebellion resulted in a hiding. But even that didn’t stop her from catching a ride the next day.

After finishing school, her first job was working at the Barberton Hospital. She would ride her bike for kilometres every day to get to and from her job as a typist. And when the opportunity arose to work at Barkley’s Bank, she grabbed it. She did all of this before the age of 18. She was motivated and not afraid to work, even when generally women of that time didn’t have jobs.

But then the war came to South Africa.

During the Second World War, soldiers from different regiments were encamped just outside of the town. My grandmother vividly remembers the day the soldiers first arrived. Her mother and a friend excitedly waved at the soldiers as they marched through the town, supporting the brave young men who would be trained and then sent off to war.

Reality hit home especially hard as many of the men in the family signed up to fight. Not all of them would come home; some were shot down over the Mediterranean Sea. My gran did her part as well and joined the army at 18. She served as a Private at the First Brigade Headquarters, doing case paperwork and typing. At the same time that she served in Barberton, her closest brother, who played a big role in her upbringing, went to fight in Egypt, where he would join the Desert Rats. It was a difficult time for the family, and my great-grandmother was distraught over her son going to war.

My gran tried to play a role in making life easier for the soldiers. On Saturday mornings she would make them breakfast while Saturday evenings she’d dance with them. My gran loved to dance. She took classes throughout her youth and the steps she learned would come in handy on those Saturday nights. She recalls a conversation with a young soldier one night at a dance. While taking a breath of air, he confided in her his fears of war. He was sure he would die. She assured him he would be fine. She would later find out that he did indeed return home. Others were not so lucky. Often, the soldiers were shipped off from Barberton the next week or the following month and many would perish up North.

At 19, the wide world called my gran and she would leave Barberton forever, travelling, living and making memories all over the country. She left behind her aunts, Susie and Lottie, who would go on to start Barberton’s first florist shop. She would leave behind childhood friends. For a time she’d even leave her mother. But the Lowveld, with those special memories, would always be home in her heart.

I guess the point of telling her story is about more than telling an interesting story, more than about capturing important memories of a life well lived. It’s about reminding each person that life is about the smaller things. We’re not all going to accomplish what others perceive as great things. But sometimes greatness comes in small achievements that change the lives of those around us; a kind of greatness that makes others happy. Life is a struggle, but even with the ups and downs, we generally find purpose in the madness.

When we ended our chat about her life and I asked her the ultimate cliché question, “Looking back on life, what would your advice be to younger people?” She thought for a long moment, looked at me and said she couldn’t give young people advice. Our worlds are just too different.

Hi there, my name is Leigh-Anne Harber, and next to me is my pup Saga. We're not usually this serious, but we are not keen on selfies, and this is one the best we have! I'm the person behind this blog; the main writer and the occasional photographer too. I started Lowveld Collective in 2016, as a way to put the spotlight on the people, businesses and places that give us our unique culture and laidback vibe. I hope you enjoy the stories I have to tell. 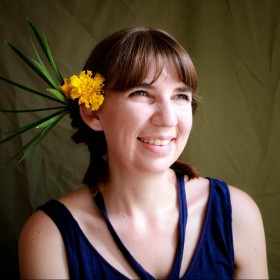 Hi there, my name is Leigh-Anne Harber, and next to me is my pup Saga. We're not usually this serious, but we are not keen on selfies, and this is one the best we have!

I'm the person behind this blog; the main writer and the occasional photographer too.

I started Lowveld Collective in 2016, as a way to put the spotlight on the people, businesses and places that give us our unique culture and laidback vibe. I hope you enjoy the stories I have to tell.